After another great lecture by Nathan Fowkes we received a new assignment: “Create 5 studies in value, use the principle of Unity with Variety as discussed in class to create meaningful relationships in the subject and the composition.”

The first time I’ve heard of “Unity with Variety” was in my 2D Design class in Sheridan College’s Art Fundamentals program. What this means is to create a work using various elements and principles of designs (variety) and make it into a single cohesive image (unity).

I won’t blame you if you are confused. I’m not sure I fully get the concept myself, even after Fowkes’ lecture and my years of art education. The trouble is that “Unity with Variety” is a principle of design, but it can also use both the elements and other principles of designs in its conception. For those of you who have no idea what Elements and Principles of Design are, I’ve written an article about them a while back. You can read it here.

This is what I have come up with for Week 02 of Pictorial Composition: 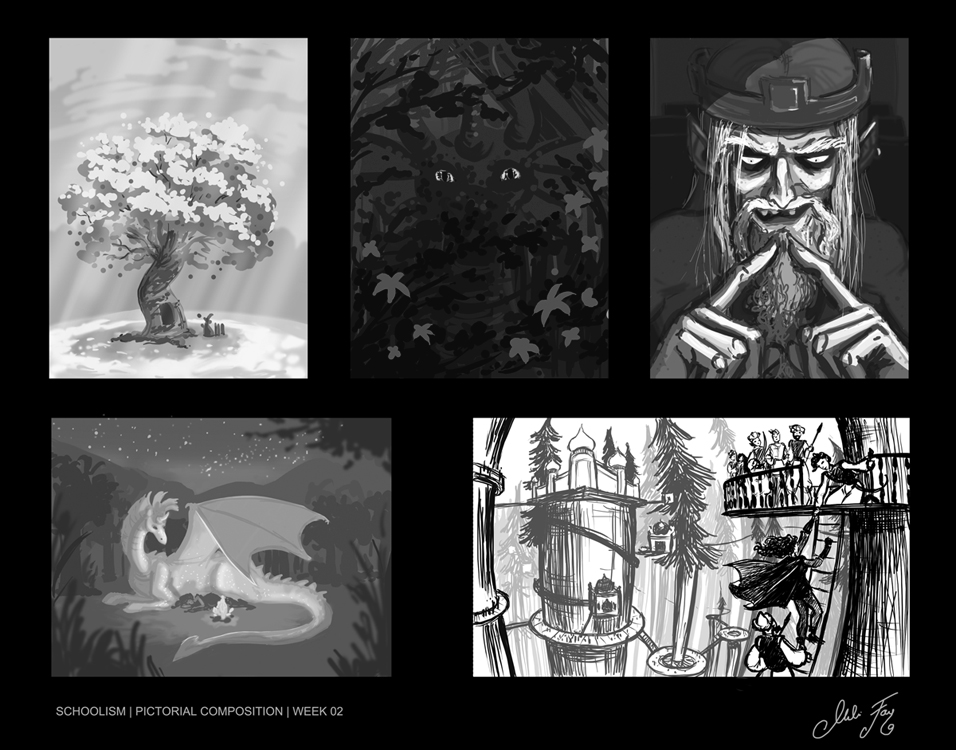 All of these images have “Unity with Variety”, but are they the best that they can be?
I personally believe that there is always room for improvement in everything, so if you can see how the compositions can be improved feel free to let me know. I love constructive criticism, even when it is vicious.

Instead of drawing random compositions for this assignment, I’ve decided to create ones I can use for work. I’m writing and illustrating a fantasy novel, therefore my images are mostly limited to the vertical orientation—a challenge in itself. The top three images will be chapter covers, the bottom left is a conceptual piece, while the bottom right will be an ink illustration in the middle of a chapter. Though the assignment states “create five studies in value”, it does not state that they all have to be painted. Therefore, I have used the element of line to create values in the last image, since the final result in this technique offers better representation of the ink illustration to come.

The question I was asking myself as I worked is not whether my assignment will get a high mark (no one is evaluating these assignments), but: Is my image telling the story I want it to tell?

When Alfred Hitchcock was asked how he is able to create with such amazing direction, he replied that he does not show the audience everything, but only what they need to know at a given point in time.

This principle has been a guiding force in my work ever since I’ve read the story in college: What does my audience need to see? 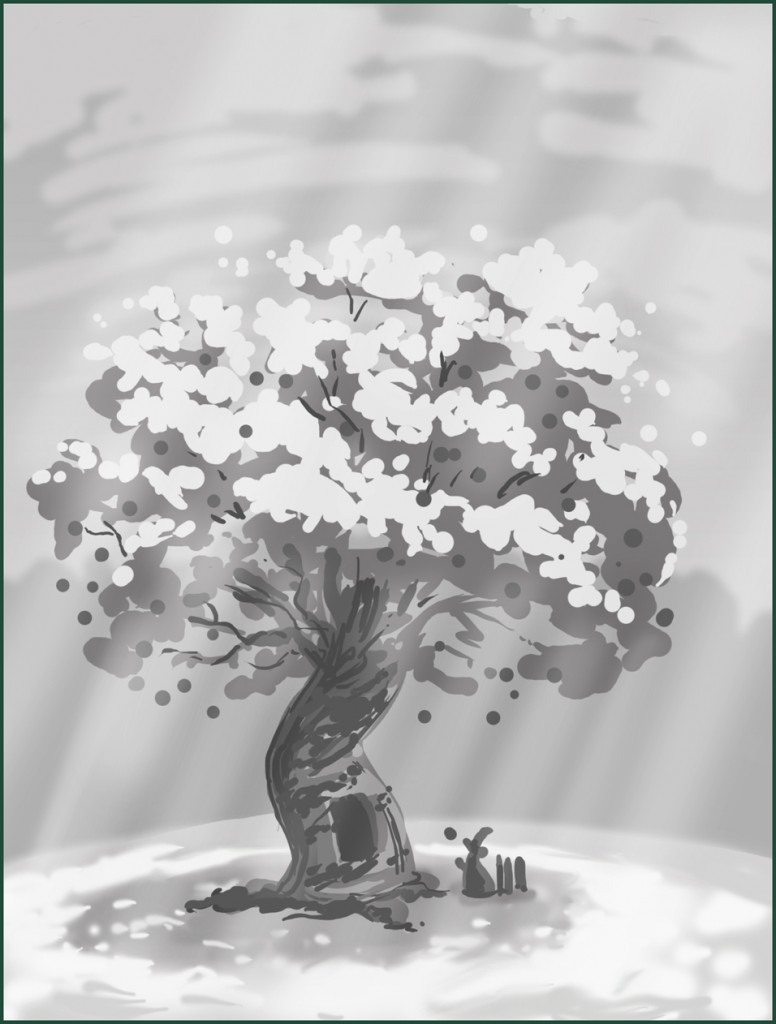 Story: Emerging from a dense forest into a circular field, Cornelian (the wizard), Artemis (the owl), and the three teenagers have reached the base of an enormous apple tree. Cornelian has just opened the secret door in the tree’s trunk. The day has been turbulent, but the sun has fought its way through the clouds and is bathing the tree with brilliant shafts of light.

This image will be painted in acrylic. What you see here is just a tonal sketch. Because this part of the story is not scary, I have decided to keep the overall values of the composition light. There is high contrast in the tree, but that is because the tree is the main subject of the image. The background on the other hand has been grouped in mid value. I have kept the composition central with a middling horizon line to give an almost symmetrical balance to the work. There are curved horizontal elements (clouds, forest, horizon, characters) contrasted by the strong vertical image of the tree. There is a repetition of apples, and foliage strokes to give the image rhythm, but nothing dramatic. I have not added other elements to the picture, because I do not want to create any distraction. I have not added a foreground element to give the image depth, because I feel creating an illustration of open space and vastness is more important.

As you can see I had a clear plan, and I believe that the variety of the pictorial elements have come together to create a unified composition: Unity with Variety. 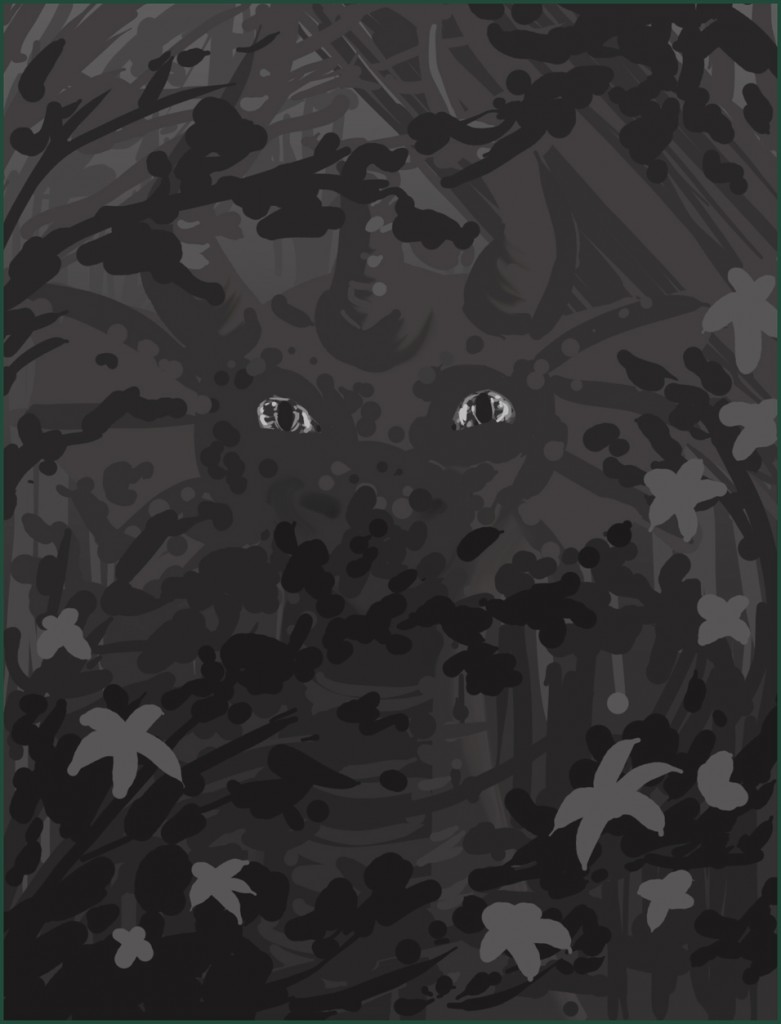 Story: Vert Swiftwing in dragon form is hiding and watching our heroes. If his eyes were closed the viewer would see nothing but the foliage. However, there is an actual dragon drawn underneath

the layers of leaves.

Mood: Mysterious. Nonthreatening, but with a potential to become threatening.

Because the mood is mysterious, I have decided to keep the value scale of the overall composition dark and close in value. There are no bright contrasting lights, because that would create a feeling of excitement and even danger. There are also no weird angles for the same reason. The rhythmic repetition of the foliage and flowers follows a circular pattern, working as a bullseye to focus the viewer’s eyes. There is a slash of the angular tree to keep the viewer’s eyes from spinning until they get dizzy. The darkest branches are separated in a widening pattern to create a moving direction–bottom right corner to top left corner. There are many subtle layers of foliage to create a feeling of depth, but also closeness. This moment feels intimate. The bright eyes have the greatest contrast to draw our focus and create an element of surprise. 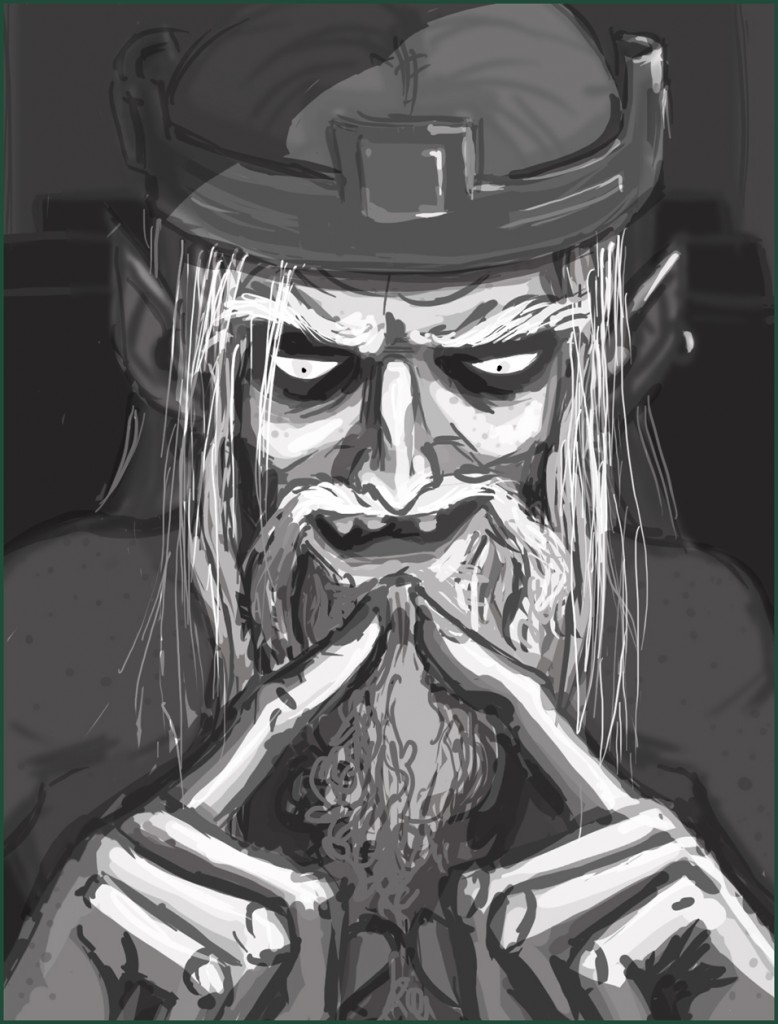 Story: An evil centaur king is threatening our heroine.

High contrast, angles, focus vs. out of focus,… I wanted the viewer to focus on his evil eyes, so even the fingers are pointing towards his face. The entire composition is uncomfortably close. The slash of light is almost like a slash of a sword. The gentle horizontals of the position contrast with the vertical of the subject, and angles of the hands, ears, mouth… I may wait to finish the lectures on lighting before actually painting this image if the time allows, because I do not know enough about designing with light and how far I can push the design. For example, the source of light in this image should be firelight (torches and maybe hanging oil lamps) on either side, behind, and above the centaur. I highly doubt that that kind of a light source could result in the lighting of my image, but that is where design takes over reality. My question is: Did I take too much liberty with my light design? 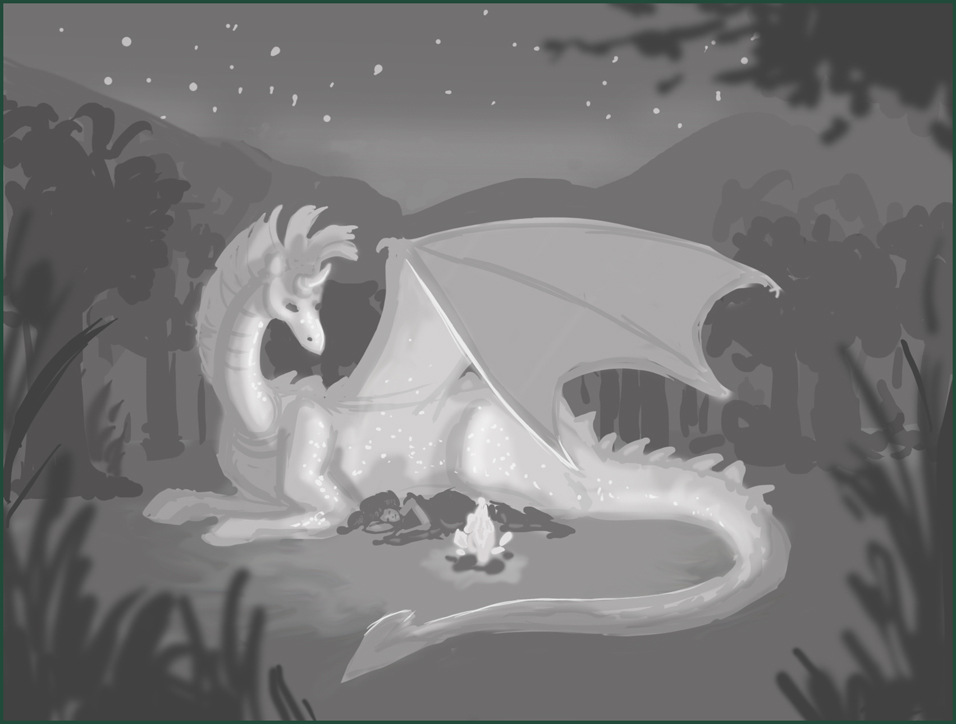 Story: This image has been playing around in my mind for a while now. If Warriors of Virtue is to be divided into printed books, this image is a scene from Book #2—Cured by a Rose (working title that I may change because it sounds too romantic). At this time, the story is classified.

There is a wide range of values for this composition. However, though there are very light lights and very dark darks, all of them are grouped in a way that feels balanced and therefore nonthreatening. The rhythm of the stars is echoed in the highlights of the silver dragon’s scales. The sleeping girl contrasts with the dragon’s body. The fire is burning merrily. The strong horizontals create peace, the mountains point to our main subjects, the foreground and the vertical trees frame them protectively, creating a feeling of peace and privacy. The composition is also centralised like the others to give it a further feeling of stability, but the lighting creates a very different mood. The circular light pattern and the shape of the dragon’s tail further create the feeling of unity and privacy. 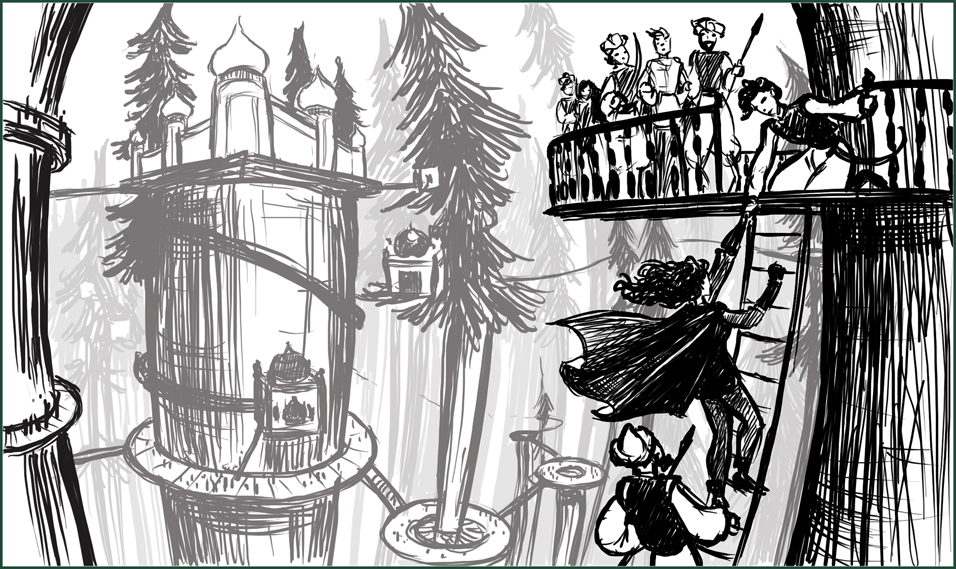 Though the main characters are threatened, the threat is not imminent. This image is not about their fear, but the scope of the environment. I have attempted to use the curvilinear perspective to show as much of the environment as possible. I have also created circular pathways to create an illusion of depth in their repetition, though they are of different sizes. The same should occur with the repetition of the trees. I will need to do more research regarding Middle Eastern design and architecture, but I tried to bring in the feel to some of the structures. Chameleon-people are fairly human-like, except that they are shorter and they walk on their toes like raptors. I have also created a value scale that creates a feeling of atmospheric perspective, with the highest contrast in the foreground. Unlike the other compositions in this assignment, this composition is not central and our focus is taken primarily by the characters and the palace.

Assignment for Week 03 is to create 10 value compositions using only value, but I have so much other work that I do not know when I’ll catch up.