For the past couple of weeks I have been working on editing my fantasy series Warriors of Virtue. The first couple of chapters have been edited often since I first wrote this story when I was sixteen. Therefore, they did not take as much work. However, now I find myself working through text that makes me cringe (please note: I am a recovering perfectionist). The progress is slower and since I am my own boss I have to find a way to keep myself motivated. I came up with this brilliant plan where I am not allowed to do any drawing until I have at least 10 pages of text edited. You may think that 10 pages of text is not much. This would be true if I could only work on my story. However, the last few days I have been interrupted almost every hour with unplanned tasks and by unplanned visitors. As a result, I barely got through eight pages in two days!

Where is a private island when a writer needs it?!

Today, I’m barricading myself in my room, and I am not coming out until I get at least 20 pages done!

I did manage to get through my quota last week and on Monday, so here are some concept sketches for Warriors of Virtue. I’m trying to combine this illustration task with my Schoolism lessons, and so far the two have meshed well. 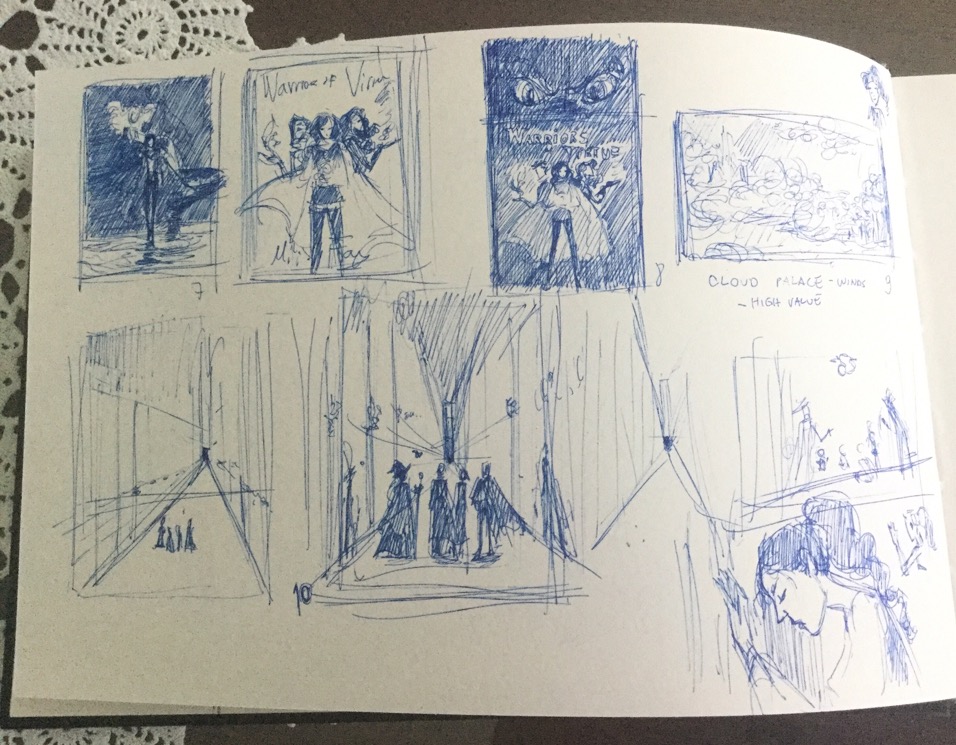 I work very roughly while sketching out ideas. Starting top left to right what you can see here is a thumbnail of: a transformation scene, when a character becomes a Warrior of Virtue by joining her soul with an enlemental spirit (I’m currently editing this section of the story); cover art concept sketch, the first is for a regular book format, the second is for a Kindle Series; Sky Kingdom garden–this scene takes place near the end of what would be a second book if I decide to print the series; the first four on the bottom are of our heroes in the Hall of Mirrors; at the bottom right we see Lauraliee leaning her head against a mirror–the mirror in question is not ordinary and that is why we do not see her reflected face. 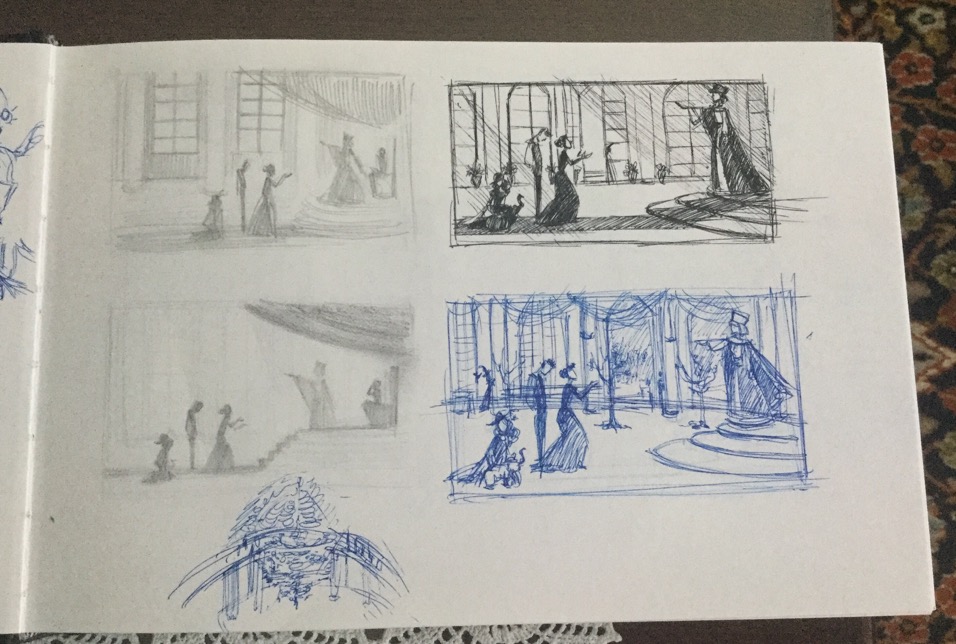 Our main characters are three royal teenagers. However, because they have led such a sheltered life, at the beginning of the story they are very childish. Prince Vladimir plays a trick on a maid, and our heroes are summoned by the Queen. In the above sketches we see Princess Lauraliee arguing with her mother, because she had nothing to do with the trick. The blue sketch will be developed further. If you are wondering what the bottom blue squiggles are, it is a down-shot of the chandelier in the Empyreal Ballroom, facing the entrance door and showing the way up to the mid-level gallery. 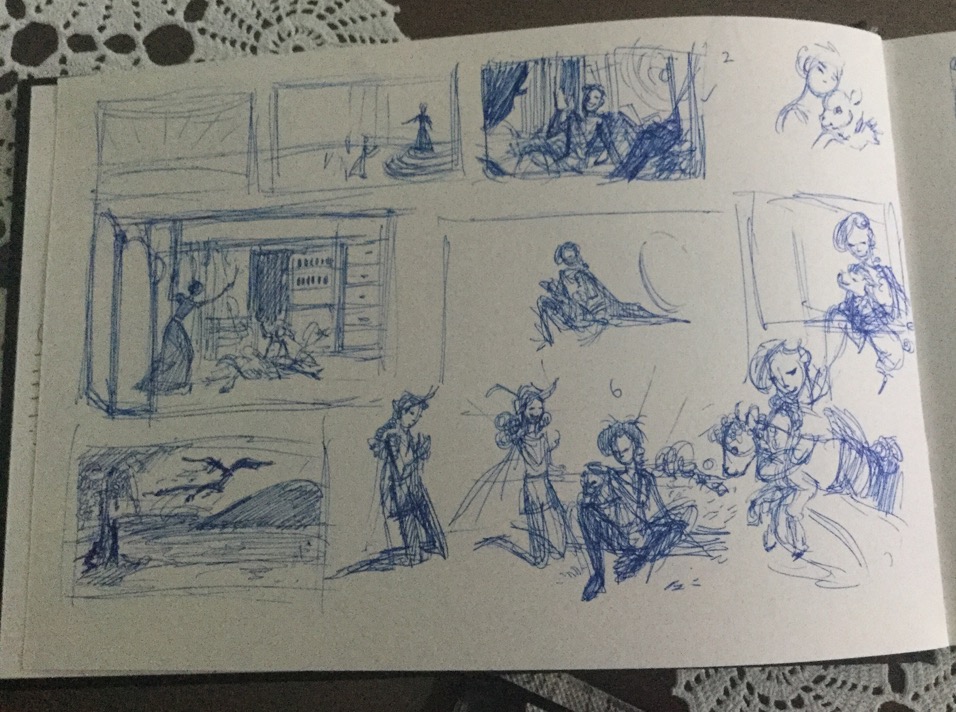 From left to right top row: perspective guide that did not work out; Lauraliee arguing with the Queen; Lauraliee discovering Vladimir and Nikolina in her closet; a copy of a pose from a painting.

From left to right middle row: Lauraliee discovering Vladimir and Nikolina in her closet, a wider angle shot; the next two are of Lauraliee holding a squirming lamb.

From left to right bottom row: Vert (in dragon form) making his presence known to our heroes at the Emerald Lake; couple of sketches of Lauraliee holding the squirming lamb while Nikolina claps in joy. 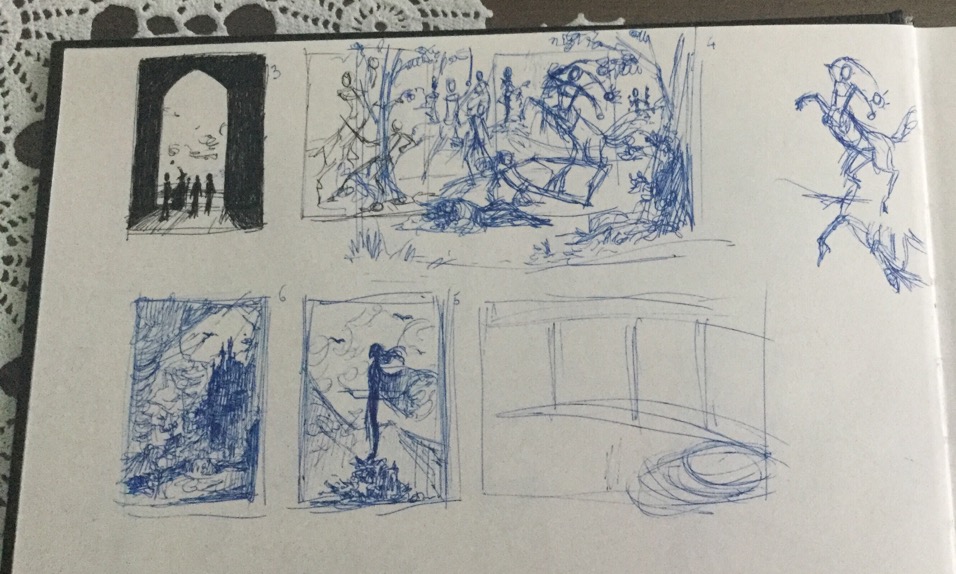 From left to right top row: our heroes leaving Empyreal Castle to begin their journey; our heroes being attacked by a herd of wild centaurs; a rough sketch of the main centaur (I’m trying to figure out the pose).

From left to right bottom row: Storm Rock, home of the dragon people; Legolas standing on top of a tree; playing with the perspective of the Empyreal Ballroom.

Legolas has made it in this sketch, because I’m currently trying to find the time to complete his design. 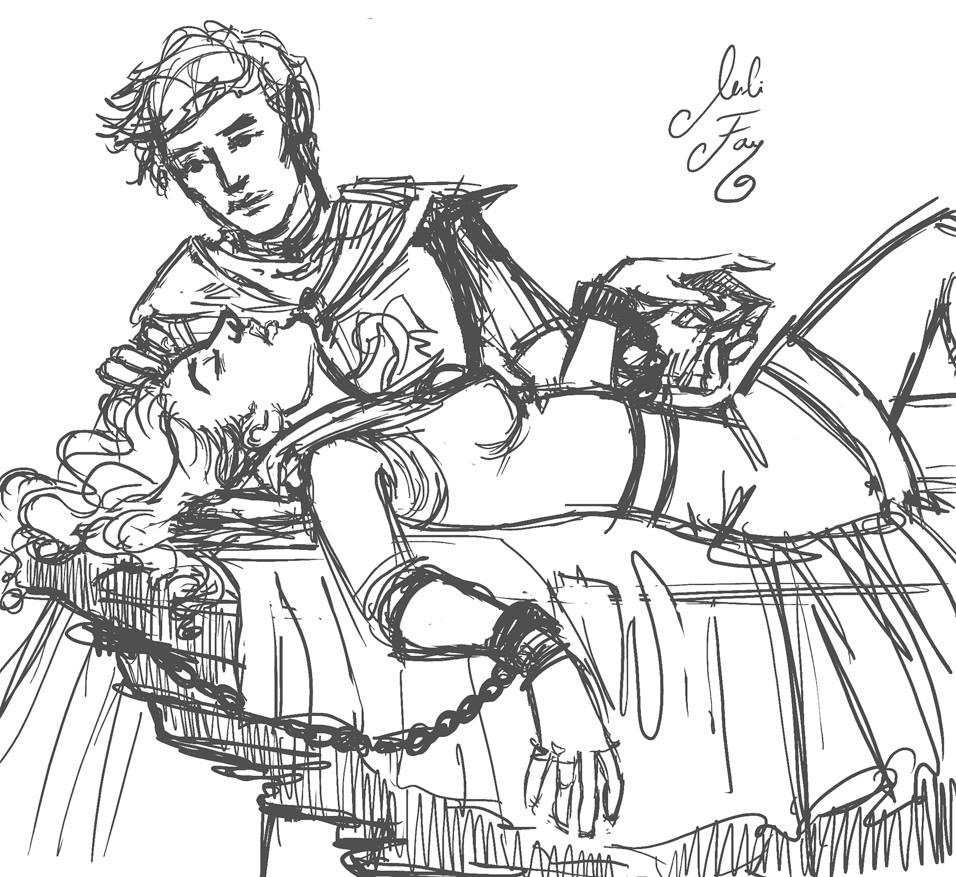 Could this sketch be a beginning of a love story? Well, you’ll have to read the series to find that out. 😉

I hope I’ll have more sketches for you soon. Until then…