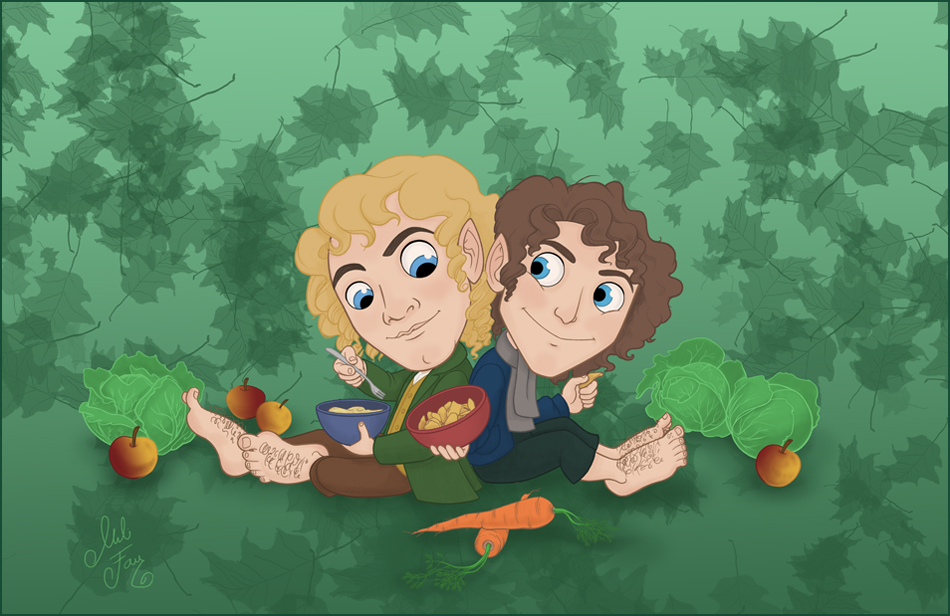 Merry and Pippin from The Lord of the Rings

I have been talking about Warriors of Virtue, my upcoming fantasy, since I first decided to publish the series in November of 2014.  It has been almost two years, and my first Episode still needs to make its debut online. People are beginning to ask me: “When will it be done?”

This is a difficult question to answer, because publishing Warriors of Virtue is just as great an epic story as the fantasy series. I am the hero of the epic, an artist/writer fighting for a dream, against vast competition and prejudice on a non-existent budget.

I believe it will be soon. Currently I’m seeking readers willing to read the series for free in exchange for honest reviews. This is the first time I will be publishing a book I will markup myself (this is why I took Ryerson’s Digital Publishing and Design course—my current average is 96.96%), adding illustrations to a format that is more suited to reflowable text. I need readers to let me know if the books work technically before I extend them to the general public.

As you may have realized, I am a perfectionist. If my stories are not good enough not only to compete with trade publications, but to surpass them, there is no point in my self-publishing work at all. I firmly believe that Warriors of Virtue is a great epic story that will survive long after I am gone, but I am also open to second opinion. I am Arthur, but I need Merlin to guide me. The Review Crew is to take that role, ensuring that the book produced is the greatest work of fiction to hit not only digital shelves, but world-wide trade publishing shelves. Are you willing to step forward and join the crew? Space is limited and perks go beyond getting the story for free. You can stimulate change, and be a part of a revolution that has not been seen since Harry Potter. Not only will this story entertain, but I hope it will inspire the readers to make a positive change for the entire world.

I believe this so much, that I challenge you to prove me wrong. 🙂

So, though I think I can have the first few episodes in the series done by mid-September/beginning of October 2016, I will not release Warriors of Virtue until I am 100% confident that the fantasy is the best YA fantasy not only since Harry Potter, but since The Lord of the Rings.

The Beginning or Why have I quit my job and have spent the last few years living at home trying to bring my vision to fruition?

After my grandfather’s surprising death in 2009, I have lost my will to live. Nothing mattered. I have never experienced such grief, and everything seemed pointless. It has been the lowest point in my life. So low in fact, that I found myself leaning outside of a seven-story window wondering if I should just let go.

But as in every story, as in mine, when a low point squashes the hero, the hero fights back. I pulled myself back into the apartment and decided that instead of ending my life, I need to change my life.

My grandfather’s death has been the catalyst, the “Call to Adventure”.

Prior to my grandfather’s death, I lived in the “Ordinary World” (If you have no idea what I’m referring to study the Hero’s Journey). Before his death, I was a people-pleaser, believing that if I was as good as a Disney Princess, life would reward me with my happily ever after.

After my grandfather’s death I realized that I have only one life to live, and that I should do everything in my power to make my own dreams come true. So, even though I never sought to be a leader, I decided to stop working for others and to bring the gifts I was given to the world. This was my “Call to Adventure”, “Refusal of the Call” (fears of failure if I strike out on my own), “Meeting the Mentor” (I was encouraged my teacher Mark Thurman, and inspired by Bobby Chiu.).

The way I use to believe in fairytales, now I know that art can change the world. My vision is simple: create fabulous art; sell fabulous art that will create a positive influence in the client’s life; use 30% of profits to help others.

I “Crossed the Threshold” when I decided to quit searching for further jobs, and created Mili Fay Art.

I am fortunate in that I have a very supportive family. When I told them I was quitting looking for further jobs and instead decided to work on my art, they said OK.

You see, I’m the only artist/writer in my family. My family members are all down-to-earth practical people who believe that happiness is found in a steady job and healthy family life. I on the other hand believe that I have been showered with gifts to change the world. It may be hubris, but as a very logical person, I cannot see what the point would be otherwise. If Forces That Be wanted me to find a steady job and a healthy family life of my own, instead of showering me with visions of other worlds and characters that appear more real than a lot of the living people around me, they would surely have presented me with job opportunists after college and would have made me feel more passion for the members of the opposite sex?

I have met my “Test, Allies, Enemies” as I was working on Animals In My Hair (the first book I self-published which thus far is enjoying unanimous praise). I continue to face Tests (new unfamiliar challenges, such as publishing a reflowable book), Allies (friends and fans), and Enemies (competition, lack of funds, etc.) as I continue my journey, and as I “Approach the Innermost Cave”. Most of the time, I am confident that Warriors of Virtue will be fabulous, but there are days when I wonder if maybe I’m just crazy.

You can continue to follow my journey, you can participate and become my Allies by joining the Review Crew, but until I face my “Ordeal” I also hope you will find entertainment in the fantasy Mini-MEs I’m creating to distress and find more Allies.

Lastly, I want you to remember that this is my Hero’s Journey, and though you are not the hero of my journey, you are the hero of your own, so when your “Call to Action” comes, when you reach that low point in your life, decide to be a Hero, too.

Wishing you only the best!