I’m currently seeking fans of fantasy who would like to read Warriors of Virtue in exchange for an honest review. If you liked The Lord of the Rings, Sailor Moon, Avatar: The Last Airbender, and love mythology and fairytales, join here.

If you are new to this blog, I have been writing and sketching a fantasy series, Warriors of Virtue, since I was sixteen years old. Currently the text is with my editor, and I’ve been illustrating the entire series while I wait. However, after speaking with several fans who cannot wait for the illustrated edition, I’ve decided to release a limited text-only edition. This edition will feature more realistic cover art appropriate for a YA audience. Each episode features one of the main characters. 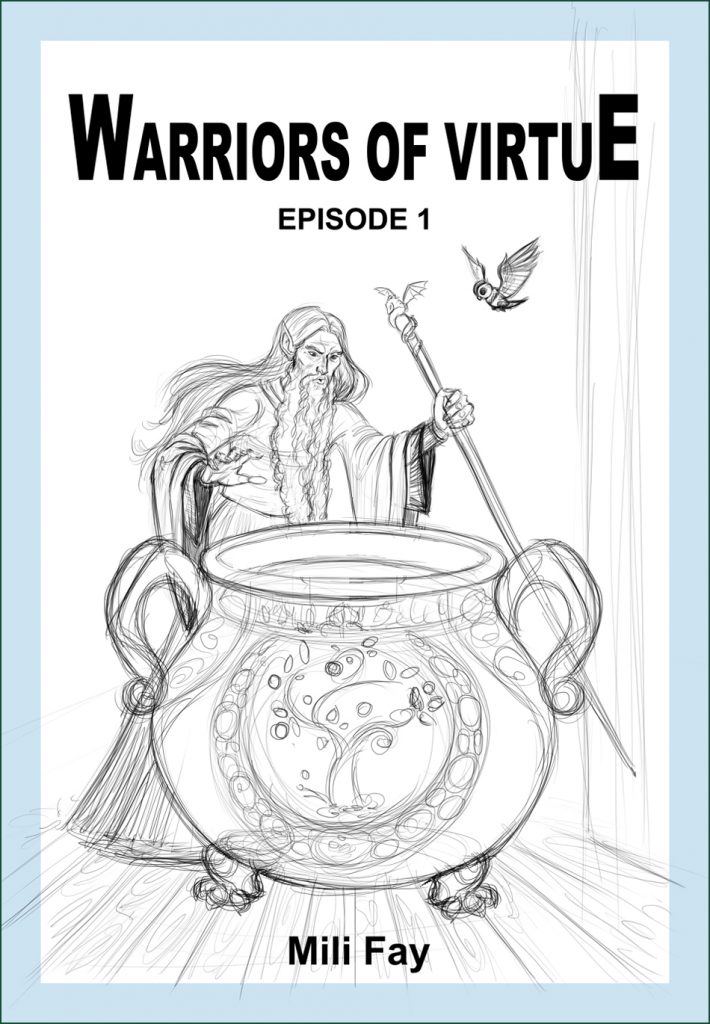 Rough sketch showing Cornelian and Artemis looking inside The Cauldron. I was inspired by some Arabian designs for the cauldron. This moment is the catalyst for the entire series.

Cornelian the Great is great because he helped defeat the Dragon Lord Malachite approximately 150 years ago. He is the greatest wizard in Ardan (the land where the story takes place), and a catalyst for Warriors of Virtue. When writing Cornelian I was inspired by Gandalf the Gray and Merlin from Disney’s The Sword in the Stone. Cornelian has a quite complicated story of his own that I may write in the future, in this series he serves as our heroes’ teacher and guide.

Artemis is a descendant of Athena’s Little Owl. He’s lived for millennia, is immortal, arrogant, and brilliant. He did something terrible to anger the gods and has been sent to serve Cornelian as punishment. However, by the time this story takes place, Cornelian and Artemis are friends, colleagues, and companions, not master and servant. Artemis loves tea and manicures. 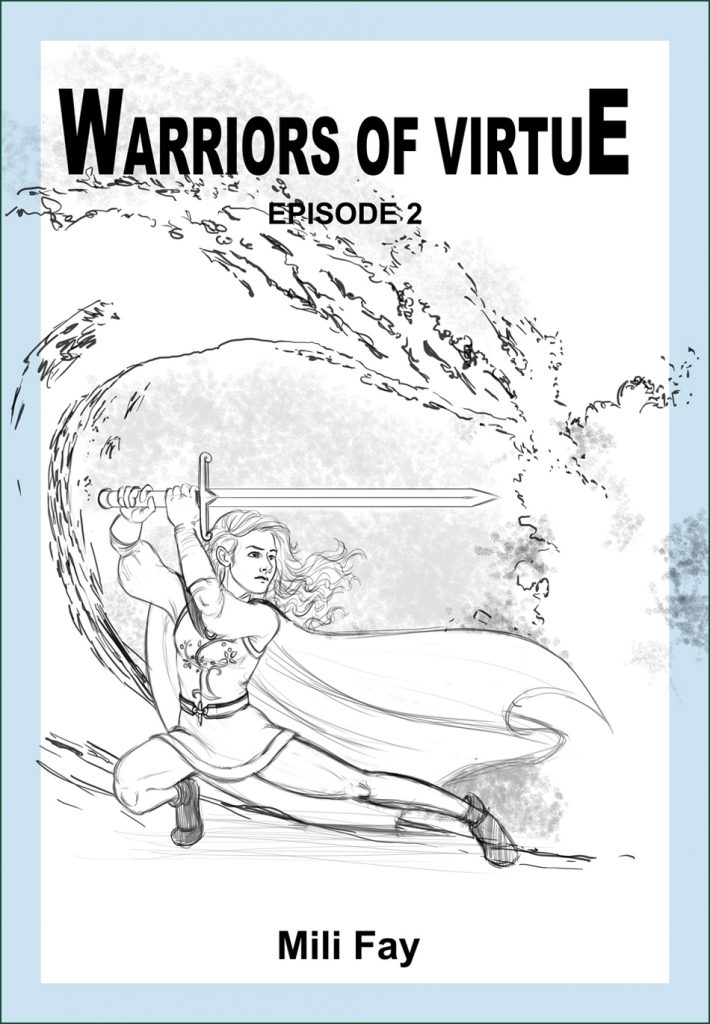 Lauraliee as the Water Warrior, Nenya. Lauraliee at sixteen has a freakish talent with a sword. She has not been defeated in a swordfight since she was fourteen.

Lauraliee Elizabeth Vickomtessa Lumijer (I have included her full name but am excluding all the exalted titles) is the sixteen-year old main character of the story.

Warriors of Virtue is written in the third person omniscient point of view, follows the point of view of many characters, but if Lauraliee is in the scene the reader is focused on her experiences.

Lauraliee is a reluctant princess, who knows that one day she will become Queen, longing for an ordinary life. However, she has also been raised well by her mother, the reigning Queen Dragana, and takes responsibilities of her stations seriously. She is the eldest child in her family, and strives to set a good example for her sister and cousins. Lauraliee loves to read and paint, and has an unusual talent with the sword. She has not been defeated in combat since she was fourteen.

As the story progresses, she becomes Nenya, the Water Warrior.

Warriors of Virtue (originally there were five: Nenya/Water, Narya/Fire, Viliya/Air, Terrya/Earth, and Mettya/Metal) were created by Mistress Nature (creator of Ardan) in the Great War to stand against Lord Malachite. Malachite killed the Earth and Metal warriors and managed to capture the spirits. As our story begins, there are only three Elemental Spirits free: Water, Fire, and Air. 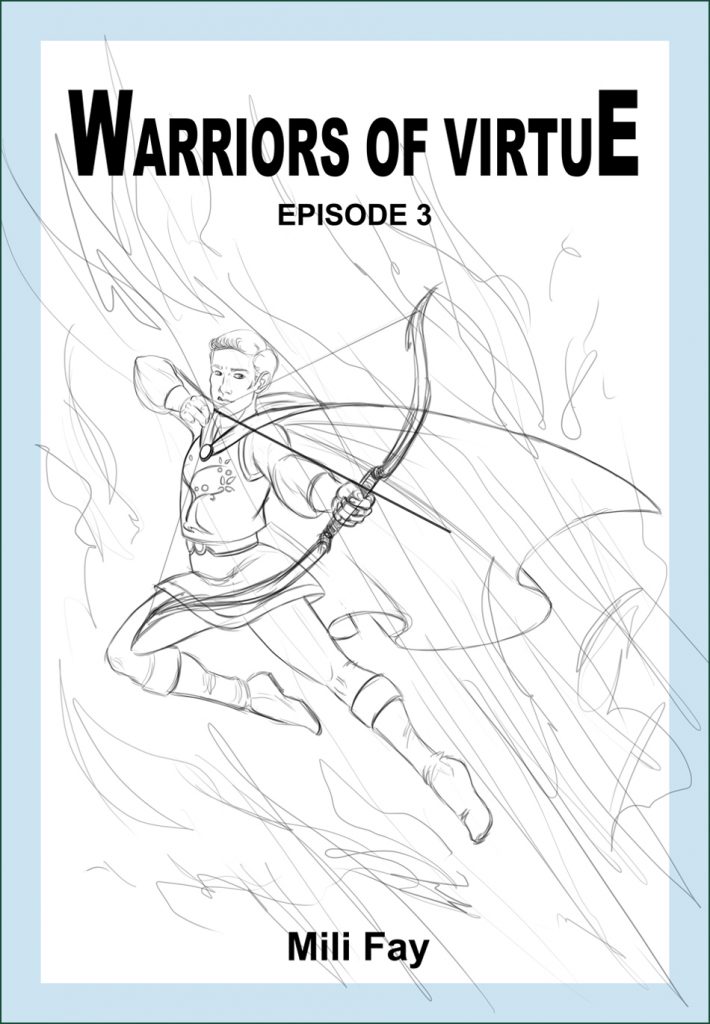 Vladimir at fifteen is the Fire Warrior, Narya. Even though he does not use the bow and arrow (in the first volume he only uses darts), he is superior in archery.

Vladimir Nicholas Alexander DePompier is Lauraliee’s fifteen-year-old cousin. His mother is Queen Dragana’s sister. His father’s family is famous for breeding fire-steeds, horses of brimstone and living flame. Vladimir is a quick-tempered, charming prankster. He’s been living at the Empyreal Castle most of his life, and is more like a brother to his two cousins. He’s in love with Anuck, the only child of chief Muhawaka. Vladimir loves Mushwaki and often argues with Nikolina over games. He is also a talented archer.

Mushwaki is a sport played in Ardan similar to soccer but at a certain point before scoring a player must continue the game keeping the ball of the ground (without using his hands). The ball is smaller, and the goalie must prevent its entrance by using a racquet-like instrument.

He becomes Narya, the Fire Warrior. 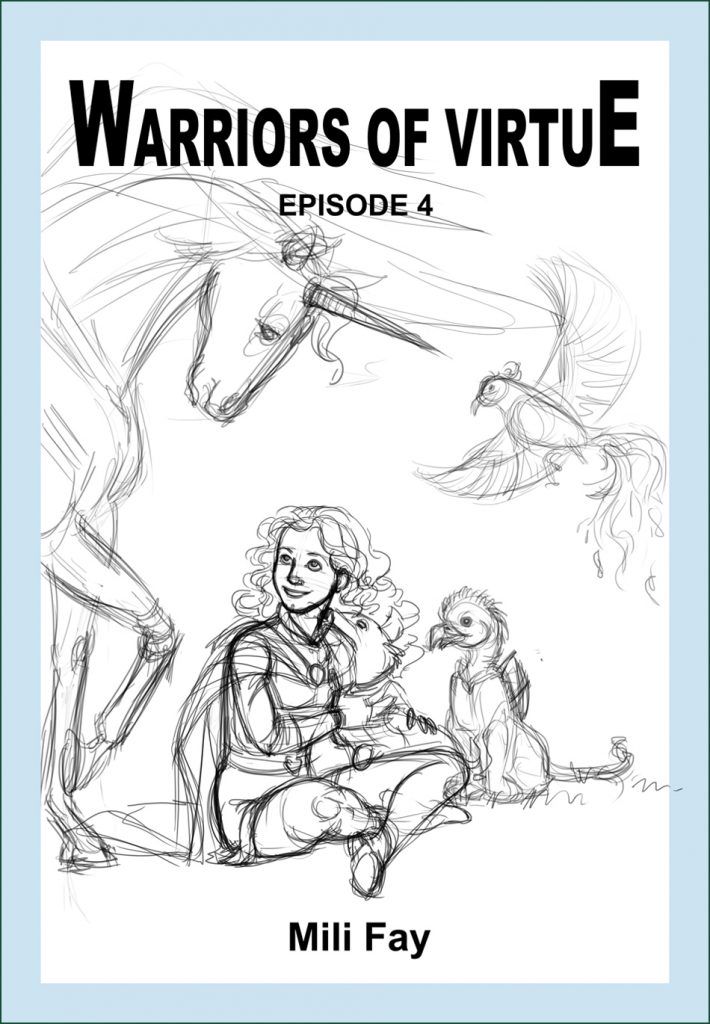 Nikolina (fourteen years old) is the Wind Warrior, Viliya. She has the ability to speak with animals.

Nikolina Katherine Marissa Lumijer is Lauraliee’s fourteen-year-old sister. She is extraordinarily beautiful, sweet, and kind. However, she is not afraid to get in a skirmish with her cousin. She is a tomboy, who loves exploring nature and can speak to animals. She adores her sister and cousin, but just because she’s the youngest does not mean she will let them get away with anything. 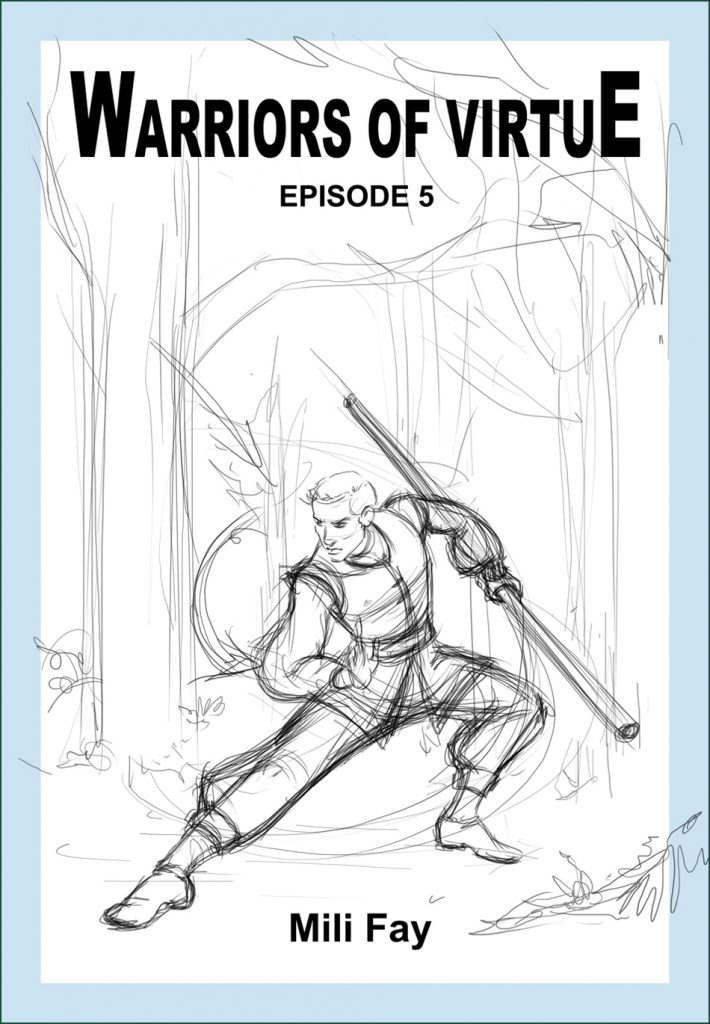 Srdjan knows how to use a wooden staff. He also has more Earth than he should and becomes Cornelian’s Apprentice.

Srdjan Jović’s parents are court ambassadors. When he and Lauraliee were seven they met, got into a fight, and became best friends. He moved into the Children’s Tower and has been tutored by Cornelian with his new friends. He has a talent for wielding a staff, and has more Earth in him than any human should, eventually becoming Cornelian’s apprentice. 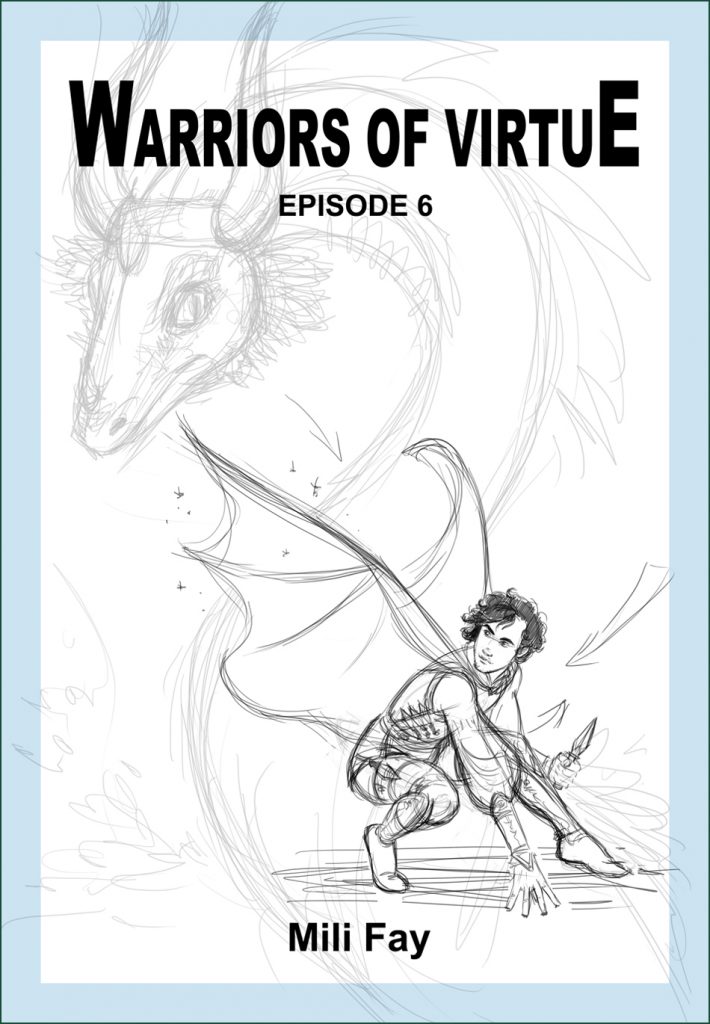 Vert Swiftwing is Prince Diamond’s best friend and Captain of the Guard. He can transform into a green dragon of Swift class.

Vert Swiftwing is Prince Diamond’s Captain of the Guard and best friend. He is about 200 years old but appears to be twenty. This is because dragon-people age slower than humans. Vert can transform into a green dragon of the Swift class. He has no issues with humans, but must follow Lord Malachite’s orders. Unlike Diamond who never ventured far beyond Storm Rock, Vert has spent his life exploring Ardan. He is witty and charming. His weapon of choice: throwing daggers. 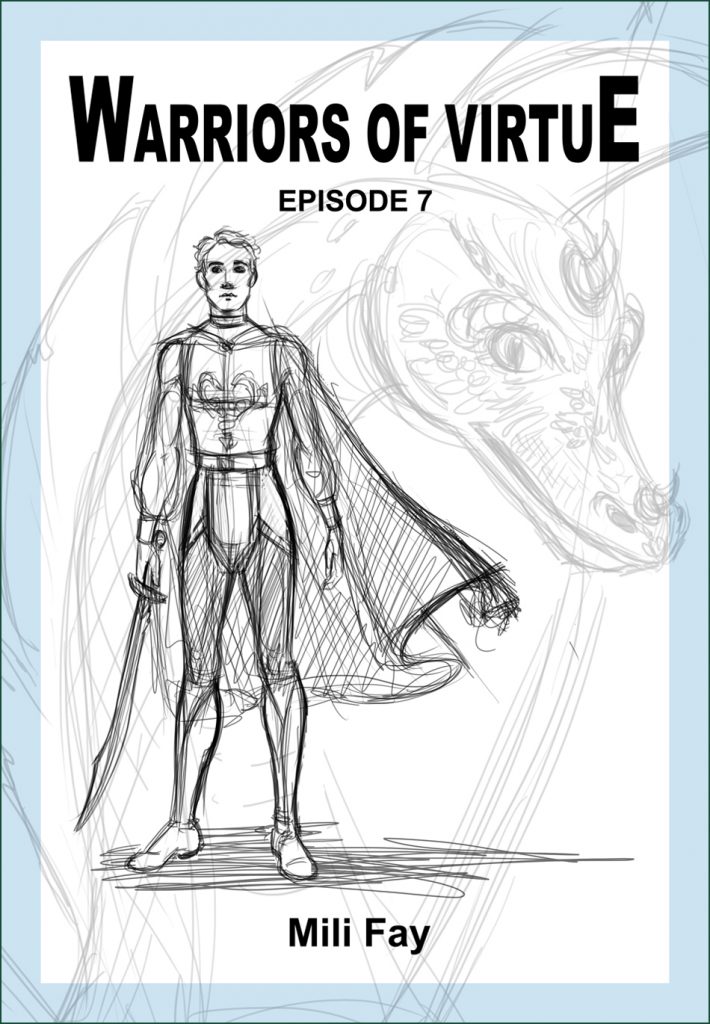 Prince Diamond Pendragon was a ruler of the dragon people for hundred and fifty years. He does not know whether to believe his father when he says that humans are evil.

Diamond Pendragon has ruled his people in a hermit kingdom at Storm Rock after the defeat of his father, Lord Malachite, since he was five (or should I say fifty) years old. He witnessed his father’s imprisonment (and—he thought—death) at the hands of the Warriors of Virtue. In the hundred and fifty years of his rule, he never returned to the council of Ardan, keeping his people to themselves. After his father’s miraculous escape, he argues with him against a war on humans. However, what if his father is right and humans are a plague that will destroy Ardan in the end? Diamond wishes he had bothered to find out more about humans when he had the chance. 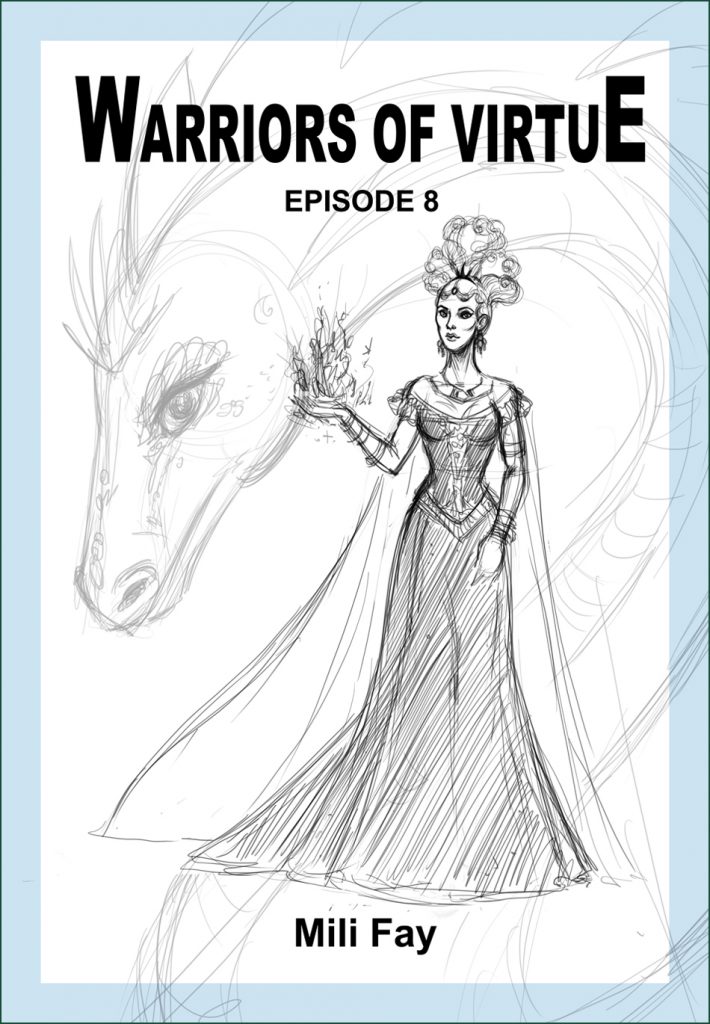 Lady Avalon is an accomplished witch and in the author’s opinion a total nutcase.

Lady Avalon Starshine is Diamond’s Aunt, twin-sister of his mother, Elonway. Daughter of a dragon nobleman and a star, she’s extraordinarily beautiful and well-versed in magic. She practices all kinds of magic, including Dark Magic, but she is not as powerful as Malachite, Cornelian, or Mistress Nature. She loves Malachite Pendragon, but is not particularly fond of her nephew. 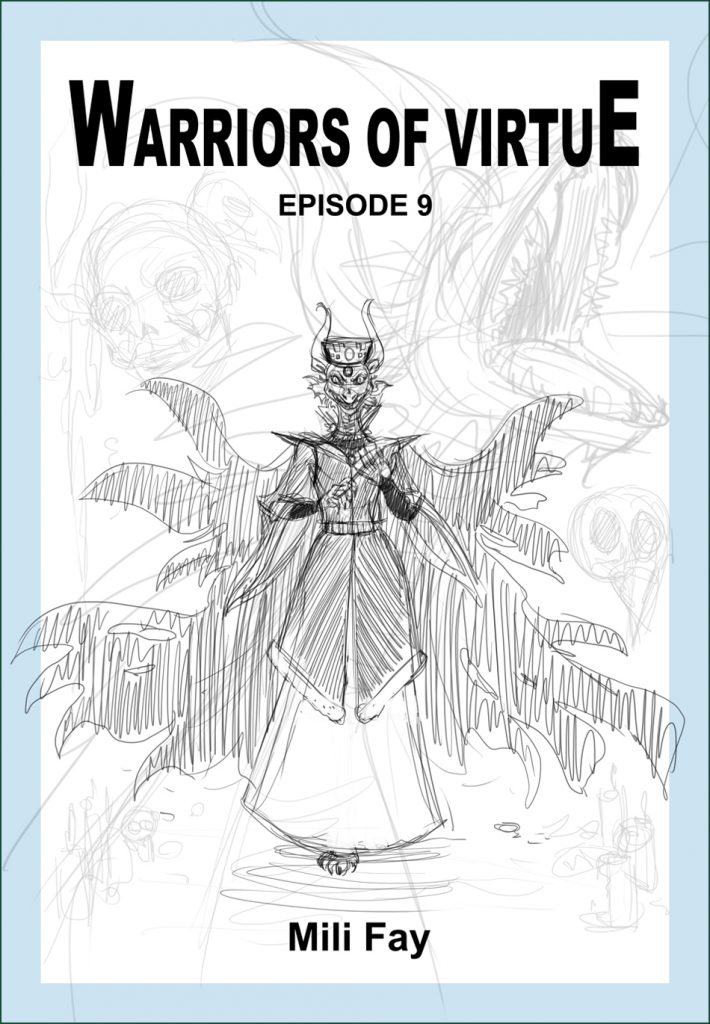 Lord Malachite has a very good reason for hating humans to the point where he wants to exterminate them.

Lord Malachite Pendragon, a.k.a. the Dragon Lord, is the ruler of the dragon-people and Diamond’s father. He learned to hate humans and has spent the last portion of his life trying to exterminate them from Ardan. He hates humans so much that he tried to get rid of his own human side with Dark Magic, but instead managed to get stuck in a form neither human nor dragon. Malachite is the most powerful sorcerer in Ardan, only Mistress Nature can match his magic and she’s a goddess. His goal in life is to destroy every human in Ardan, thus saving all the non-human residents, and rule as his people have ruled for generations.

Well, there you have it: the first nine YA covers. Let me know what you think in the comments, and if you are interested in reading the first 9 episodes in exchange for an honest review on Amazon and Goodreads, please contact me.